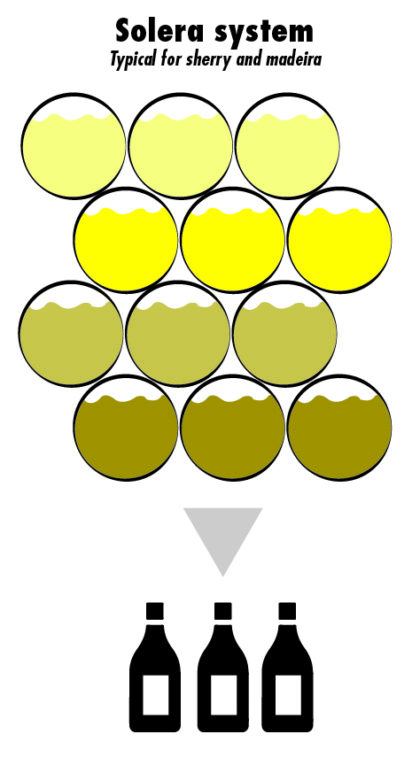 What is the Solera System?

The Solera system is a technique of ageing wine over various ages and/or styles that is famous mostly from the Spanish sherry where it is common to store and age wine for several vintages, pour parts of the aged wine from one container to another in different levels and then bottle the last mix. This means that in each bottle there will wine from different years and this can date back a very long time. The point is to get a nice blend but also a consistency year over year to balance the individual vintages that may have a bigger difference from year to year due to different seasons. Originally the oldest barrels are on the ground and the top and the bottom ones then bottled and it fills up with the second oldest. No barrel is ever fully drained. This is also commonly used in Madeira (from Portugal).

It is not uncommon to write the starting age of the bottle dating back to the earliest that this rotation has started. A bottle with 1900 on it may mean that there are traced of 100 year old+ wine in the bottle that you may have the luxury of drinking.

This method is also used for some beers, vinegars and brandy.

Confusion with Other “Sherries”

Sherry is often a wine that is misunderstood/confused with a sweet wine/liqueur but actually it is a bone dry white wine using the Solera system to create stronger white dry wine, often with the palomino and Pedro Jimenez grapes in the south of Spain.

Tio Pepe is probably the most famous one from Spain created in 1835 in Jerez de la Frontera in Spain using the palomino grape. It is a fino sherry meaning it has been biologically edges under a layer of “flor” which is a thin layer of indigenous yeast cells that occur in naturally. If you visit the centre of Madrid then in the Sol Plaza you will see a big neon sign on the top of one of the buildings. Apple bought one of them and wanted to remove it but there was a public protest demanding that the sign remained. The protest was mostly succesful as the end result was that the sign was kept but moved to the nearby building.

Learn more about wine – Check out other posts on our site!

Flor – The mystery of sherry