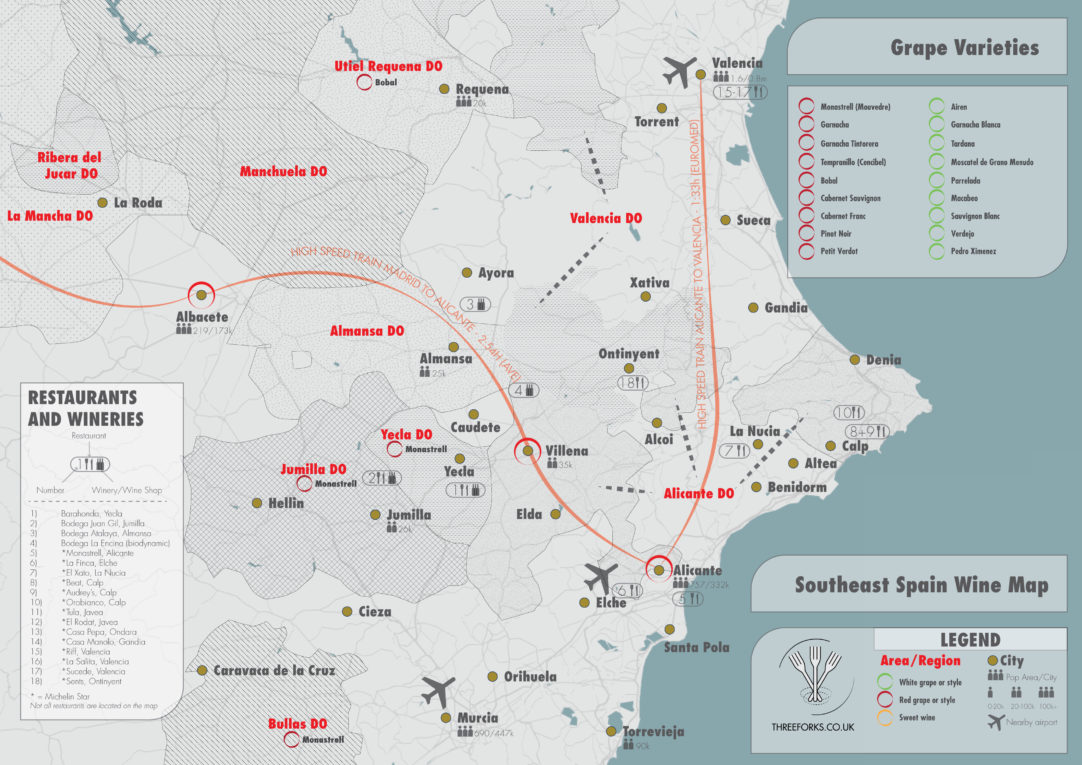 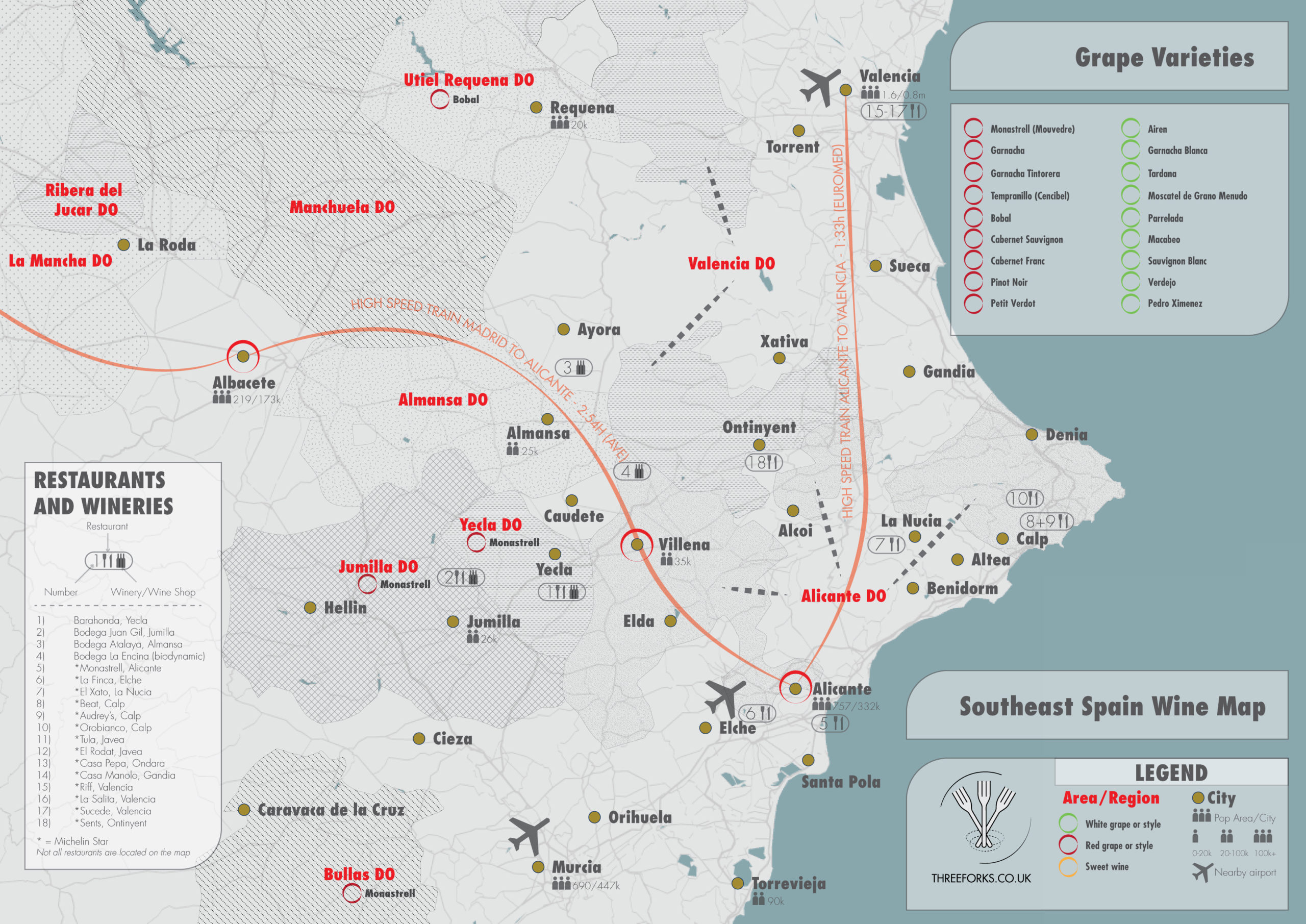 If you are interested reading a specific post about Monastrell which is typical from this region please check out our Monastrell (Mourvedre)-page.

This map shows the DOs of the Southeast part of Spain around Alicante and Valencia. There is a lot of quality wine produced and also 10+ Michelin starred-restaurants in the region making for a lovely wine trip even though the area is mostly associated with beaches, paella and sunshine. The key grape in the region is Monastrell (Mourvedre) with Jumilla and Yecla in as the more famous regions and the red Bobal in Utiel-Requena as the main quality producing regions while the quality of other DO’s could be a little hit and miss.

In terms of quantity Valencia DO produces the grand majority of wine with about 50% of the overall production and 6200 different vineyards followed by Utiel-Requena standing for another 25% of the volume produced but here the average size per vineyard is a lot smaller resulting in a higher quality of wine as a generalisation. The DO’s of Jumilla and Yecla have older vines resulting in a smaller production with a higher overall quality.

Alicante became a DO in 1957 and at that time only 4 grapes were allowed which were monastrell, alicante bouschet (Garnacha tintorera), Bobal and Moscatel de Alejandria. However nowadays more grapes have been authorized and you will now also find several french varities as well as Garnacha and Tempranillo and over two thousand wine producers. Alicante Bouschet is often called garnacha tintorera and was a crossing of Petit Bouschet and Garnacha created in France in France by Henri Bouchet in 1866 and the Alicante-name is confusing with its origin but also the fact that it is grown a lot in Alentejo, Portugal.

In Alicante DO 22% of the wines are white, 7% rosé and 68% red and it is mostly for domestic use. The DO is mainly divided in two areas with the east marine area around Denia and Calpe called La Marina and the more inland section around Villena and Pinoso which is called Vinalopo because of the river that runs through it.

You will find the Bodegas E Mendoza, Franscico Gomez, Volver and El Seque mentioned in this map in this region that are on the recommended map in the bottom of this post.

In terms of wines specific for the region you Fondillon stands out which is a sweet wine with hundred year history which is made from a selection of the best overripe Monastrell grapes in a solera style aging the wine for 10 years.

Jumilla together with Yecla is mostly famous for its use of deep concentrated monastrell-based wines with a deep colour, often described with a gamey character. 85% of the wine here is monastrell. The vineyards are located around 700m in elevation, the winters here are cold and the summers hot resulting in big diurnals with 20 degrees difference in temperatures and from up to +45 degrees in the summer down to -1 degrees in the winter. The soils are dry, there is little to no rain and the vines therefore have to dig deep to get the water. The region has previously been focused on bulk wine but has turned more towards high quality and you find really good value here. 45% of the wine here is exported abroad. Wines here are both unoaked and oaked and except monastrell you will find tempranillo (cencibel), garnacha tintorera, garnacha tinto, cabernet sauvignong, merlot, syrah and petit verdot for the reds. For the white you will find airen, macabeo, chardonnay, sauvignon blanc, moscatel de grano mednuo, pedro ximenez and malvasia.

Yecla is the twin sister of Jumilla in the sense that the wines are quite similar. If you are looking for a visit in the region then we would recommend having dinner at Barahonda which is a fantastic restaurant within the vineyard.

Yecla DO was formed in 1975. Althought it is slightly smaller in terms of how much it produces but more so in area as Jumilla has a 1/3 of the production per hectare. As in Jumilla you fill find that Monastrell is the star. Yecla export more than 90% of its production making it one of the more export-oriented DOs in Spain. In terms of temperature, elevation and rainfall it is similar to Jumilla with hot summer and colder winters but Yecla has some lower vineyards as they lay between 400-800m above sea level (while Jumilla has most around 700 m asl).

Requena is a small city of about 20 000 inhabitants an hours drive from Valencia inland. Utiel is further in and a bit smaller with 12 000 but both cities have a long history of winemaking where storage units for wine was found dated back to 700 BC.

This region is famous for its Bobal-grape with 70% of the graps planted and over half of these vines is more than 40 years old. In addition to Bobal there is a wide range of grapes planted like tempranillo, garnacha tinta, garnacha tintorera but also a lot of french varieties such as cabernet sauvignon, merlot, syrah, pinot noir, petit verdoc and even cabernet franc. Vines here grow up to 900 m asl. Bobal is similar to monastrell but it has a more high acidity to keep it refreshing and does not hit those high levels of alcohol for the most part.

This is one of the smaller DOs close to Albacete which you will pass if you drive from Alicante towards Madrid. You will notice this town when you drive on the highway as it has a big mountain with a medieval castle on top of it standing out on otherwise flat land. Almansa is famous for its Moros y cristianos-festival 1-6th of May that is celebrating the retaking of the land from the moors after 800 years of occupation.

If we return to wine then it became a DO in 1966 and has 750 grape growers and 12 bodegas over 7118 hectares. You will find usually french oak barrels and a mix of garnacha tintorera and monastrell.

This video was made by the Almansa DO in english.

The town Bullas have 12 000 citizens an is located in the Murcia-regoin as it the most southern DO in this post and if you are in Murcia it is located relatively clos to the airport. The region is specialized in young reds and rosés made by the monastrell grape which is typical from this part of Spain. Monastrell covers 80% of all grapes planted but on top of that it follows the overall tendency of the region using a lot of traditional french varieties to a minor degree such as cabernet sauvignong, syrah, merlot, petit verdot as well as tempranillo and garnacha.

Bullas is consituted of a lot of small valleys with inidividual microclimates and have poor soils. The northwest have the biggest part of the DO with 52% of the area around 500-800m above sea level and you will find monastrell and tempranillo as main grapes whereas the central region is a bit lower down with 500-600m above sea level and the northeast being the smallest area. 80% of the grapes are monastrell.

Find relevant links below. It is sorted out with “Restaurant and Winery Combined” as it is a great to eat at the same winery you are visiting such as Barahonda in Yecla.

Bodegas la Encina – This is a biodynamic winery. It is possible that they would do tastings but it is not as established as the other big ones.

This map highlights further recommendations in the zone with a combination of wineries and restaurants. If you are interested in making further suggestions please send an email here.

Bodegas Castaño – This one was recommended and they have very affordable wines around 5-6€ but their rating is quite low for most of their wines. Might be a nice visit but you should probably choose another one for their wines. 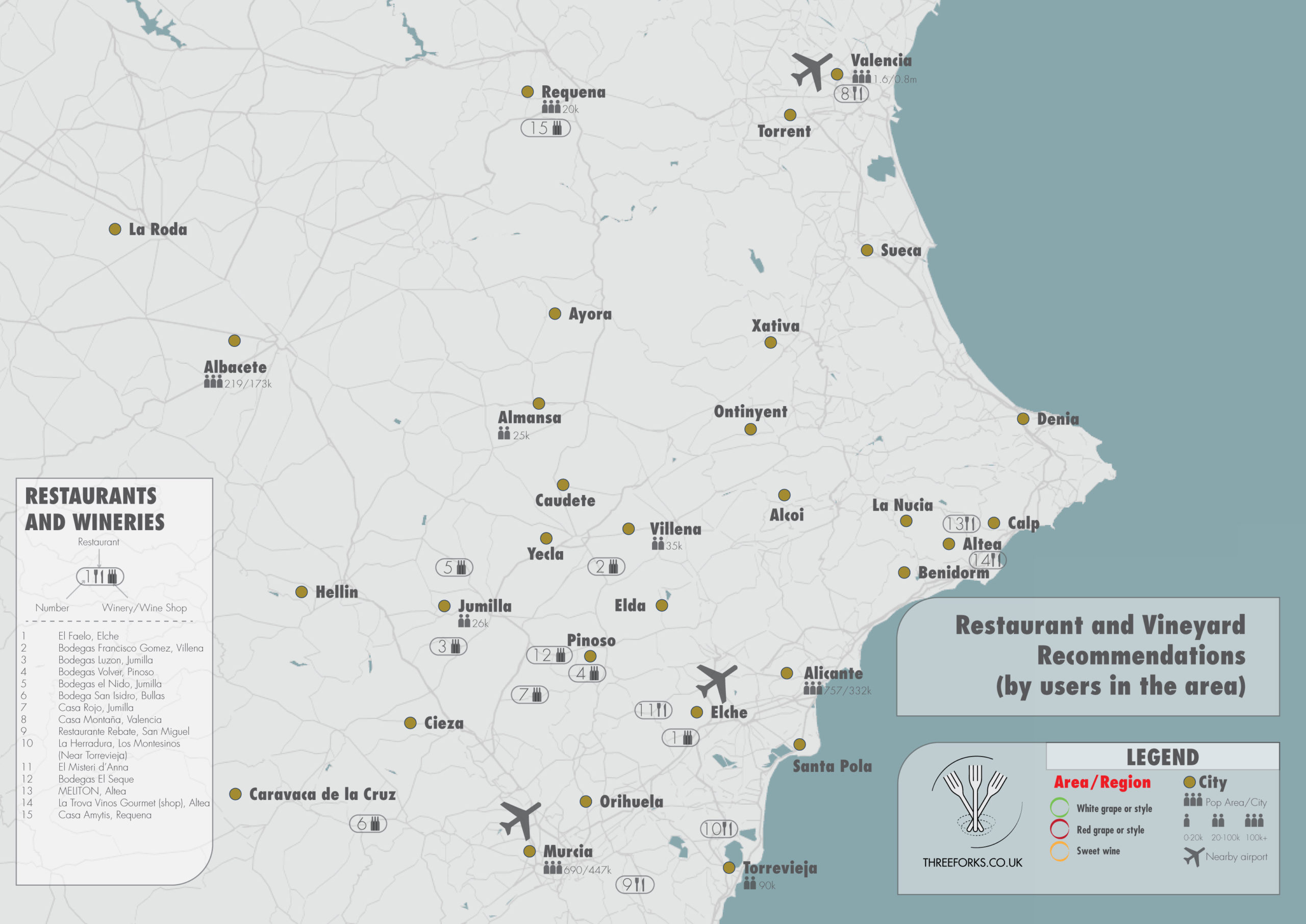 If you are interested in learning more about wine here are some posts complete with wine maps and graphics on our site!

Related on our site

If you are interested reading a specific post about Monastrell which is typical from this region please check out our Monastrell (Mourvedre)-page.  The same style of post is written about Tempranillo .